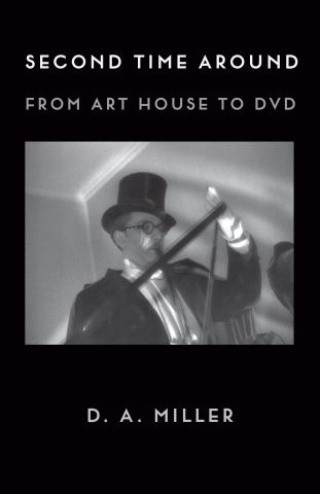 From Art House to DVD

The art houses and cinema clubs of his youth are gone, but the films that D. A. Miller discovered there in the 1960s and ’70s are now at his fingertips. With DVDs and streaming media, technology has turned the old cinematheque’s theatrical offerings into private viewings that anyone can repeat, pause, slow, and otherwise manipulate at will.

In Second Time Around, Miller seizes this opportunity; across thirteen essays, he watches digitally restored films by directors from Mizoguchi to Pasolini and from Hitchcock to Honda, looking to find not only what he first saw in them but also what he was then kept from seeing by quick camerawork, normal projection speed, missing frames, or simple censorship. At last he has an unobstructed view of the gay leather scene in Cruising, the expurgated special effects in The H-Man, and the alternative ending to Vertigo. Now he can pursue the finer details of Chabrol’s debt to Hitchcock, Visconti’s mystificatory Marxism, or the unemotive emotion in Godard.

Yet this recaptured past is strangely disturbing; the films and the author have changed in too many ways for their reunion to be like old times. The closeness of Miller’s attention clarifies the painful contradictions of youth and decline, damaged prints and flawless restorations.